Paranoia and the Cat 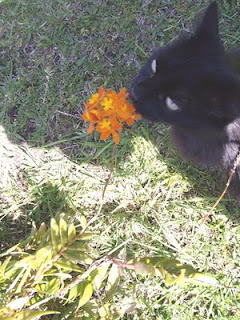 Mum has a cat. Her name is Cleo. She's had her for twelve years. Mum used to be sensible in looking after the cat. She installed a cat door so it could go in and out when it wanted to. She fed it twice a day and didn't fuss.

However, over the last four years, Mum has attached a lot of paranoia to matters relating to the cat. She has stopped letting the cat outside and keeps the cat door permanently locked. If the cat's not hungry and she offers food to it and it won't eat, she'll open a new tin of food and offer it that. Then she'll ring me and say, "Something is wrong with Cleo. She's not eating."

Last year the vet told Mum that cat is way too fat. It needs less food and more exercise. It won't get exercise as long as it's locked inside. Also, the vet told her to stop leaving huge plates of dry food around for the cat to nibble on throughout the day. But it didn't stop her. There are plates of food everywhere, and every day she tips them out into a plastic bag because they might be stale and gives it to me for my cats. The dry food she buys costs $57 per bag from the vet. It's meant to last about three months. It's gone in less than two weeks. What waste of money!

Sometimes I bring my dog when I visit and on the way to the back yard, the dog passes the cat, which hisses furiously. Mum says "Your dog is giving my cat an asthma attack! Get it out of here!" I try to explain the cat is angry and hissing, but she can't be convinced.

When I look in the fridge every few days, I find dozens of opened cans of cat food - small expensive ones - with a spoonful removed from them. If I don't check and get rid of them, in a couple of months they are all in there rotting, so I've learnt to sneakily make them disappear every few days. If they look OK, I take them for my cats.

Then there is the matter of plates. Mum feeds the cat on the plates she eats off. It makes me feel sick. I've tried making her stop, but you can't. You cannot convince a person with dementia that they are wrong. They are living in another world where everything you say is a lie, and everything they believe is the truth. If you try to convince them of some fact, then you are conspiring against them in some way, so it's best to say nothing.

But then even when she was younger, she'd feed the cats on plates from the family dinner set. She was even a bit paranoid for a while there, going outside at 2 a.m. going 'Puss! Puss!' because she imagined her cat was 'lost'. My father used to get so angry about it. She was only in her 40s then. She did get over that after a couple of years of being told off.

Now Mum keeps 'losing' the cat. She can't see very well, but she can't reason that the cat door is locked, all the other doors are locked and there is no way for the cat to escape. If she can't see the cat, she believes it is 'gone'. She starts to panic. The cat is usually under a bed, but she can't think to look in all the hiding places, she just panics.

Three weeks ago Mum rang me three times from 9.30 p.m. to tell me the cat was 'gone' and that I had to go and find it for her. I refused, and on the last call, I pulled the plug on the phone. I'm glad I wasn't there to see how angry she was.

I just hope she didn't ring her neighbours, as they are getting a bit fed up. One neighbour told me recently she visited five times in one day, each time to give the neighbour the same piece of news. She didn't recall the previous visits.

Around that same time, at about 9 p.m. at night, she believed someone was standing on her back porch and called a home handyman to come and look. A small shop-door alarm she has was being set off, possibly by a stray cat or the wind. She asked the handyman to disconnect the alarm and paid him $50. If this kind of thing keeps happening she'll be broke in no time.

But I think the biggest cause of her paranoia is that cat. Sometimes I really hate the poor thing.
Posted by Pye at 10:10 PM