My mother has Alzheimers Disease

I have changed the name of this blog from "My mother has dementia" to "My mother has Alzheimers Disease". The reason is, that previously, the specialist had said it's most likely vascular dementia. It wasn't progressing much and her memory wasn't too bad. She could pass the mini-mental-state test with flying colours. She was mainly just paranoid.

But the last few months things have got worse. The specialist says it's now most likely both kinds of dementia, but definitely Alzheimers now.

The deterioration over the past few weeks has been noticeable and shocking. I had thought she'd coast along for the rest of her life being more or less the same, but things have really taken a dive and almost every day, I notice a skill or ability she no longer has.

When I visited her in the nursing home where she's having respite, last weekend, I found she'd broken her mobile phone into bits and put all the bits in various drawers. I managed to find them all and put it back together.

She's losing the lids off everything - makeup, face creams, toothpaste, and she's pulled the nozzle off the expensive bottle of perfume I left for her and lost it.

For the past three or four weeks she hasn't been able to find and put on a bra, so if no-one dresses her, she goes bra-less. She basically can't find any of her clothes and needs someone to stand there and pass her things. At the nursing home, they don't dress the residents as it's only hostel care. So I've found her dressed in some very odd combinations, probably chosen by the Alzheimer lady in the next room. 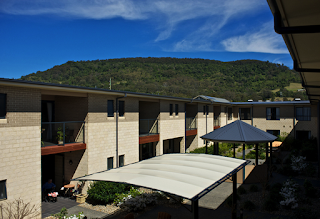 She's started keeping her shoes in her undies drawer or other parts of the wardrobe, and she almost always puts her shoes on the wrong feet.

She gets her clothes in a terrible mess, pulling them out and then throwing them back in at random. She won't put her clothes out to be washed, but she was the same in the nursing home where she lived for 8 months last year. She believes the clothes won't come back and so she hides them.

A few months back, she wouldn't do any of these things except the hiding dirty clothes thing. The deterioration is so noticeable and such a terrible shock when I wasn't expecting her to ever deteriorate suddenly.

Physically she is as fit as a fiddle and can walk for miles. But mentally she is racing towards death. I can see that she will reach Stage 7 very quickly, even though the mean duration of the 6th stage is 2.3 years.

She has absolutely no idea where she lives - the suburb, the street, completely blank on those questions.

She started putting her clothes on inside out and backwards about five weeks ago. One day I found her in the bathroom after her shower, trying to put her legs into a skivvie. I have to take away her day clothes now - which she strongly objects to - and only leave the pyjamas in the bathroom, otherwise she'll put back on not only her pyjamas, but everything she's worn that day, including the dirty underpants.

I have read that urinary incontinence is the next stage.

Quite often she does not know who my daughter is, and she didn't know who I was on a couple of occasions. Her speech is OK, but all she wants to talk about is cats.

Stage 7 is so horrible I hope she doesn't live that long, but unfortunately, she's in such good health, she probably will.

I never thought it would come to this. I never thought, because not one other member of her large family ever fell victim to such a terrible thing. All her aunties except one, fell victim to an early stroke. Her own mother died at 72, with some minor mental changes, of heart failure. The aunt who lived to be over 90 had all her marbles when she died. The men in the family died early of lung or heart conditions, or cancer, well before they could develop dementia. Her brother died of cancer at 78, her father of a heart attack at 58. Her maternal grandmother died at 87 following a very short - 3-week- episode of mania. Before that, she was spending her days betting on the horses and listening to the radio. So there wasn't too much wrong with her. Her paternal grandparents died aged 34 and 54. No dementia there - but had there been modern medical assistance, they may have lived long enough to suffer this, who knows. I know the medical histories and causes of death of her great grandparents as well. 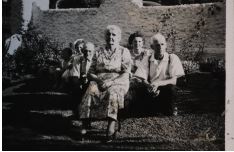 Elderly family members in the 1950s - and not one of them with dementia.