Mad as a cut snake, Mum jumps out of the car and a psychotic episode

What a terrible time we have had the last few days. On Friday, she was particularly crazy, her eyes looked odd and she went deaf. The doctor couldn't see any wax in her ears, but the nurse syringed them out just in case. Still deaf. The doctor said she probably won't regain her hearing. How suddenly did that happen! I'm not getting her another hearing aid. She just won't wear one - waste of $600.

The doctor thought maybe she'd had a small stroke, so he wrote a letter for the hospital and told me to take her up to Casualty.

On the way, in peak-hour traffic, at 80 kph, she suddenly decided to jump out. Without warning, and in one swift movement, she undid her seatbelt, opened the door and out she went. Half-way out, I grabbed her by the jumper, while swerving to try and miss the telegraph poles, the passenger door swinging in gale-force winds, and trying not to hit any of the other traffic. The door hit a pole and was damaged.

I put on the hazard lights and stopped the car, got her seatbelt back on and shouted at her, "What the hell do you think you're doing?" "I know what you're up to," she said. "You're going to dump me at that hospital." I realized it was after 3 p.m., when the paranoia kicks in. 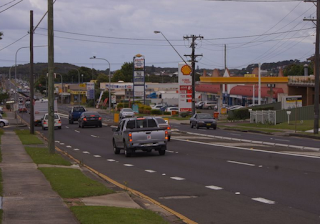 
I drove around the block and found somewhere safe to stop. I wasn't taking her anywhere in that state. My car doesn't have child-locks. I dialled 000 and requested an ambulance. By the time they arrived, she'd got out of the car and was headed up the footpath.

The paramedics clearly were not happy to have been called. They glared at me angrily and asked what was going on THIS time, referring to LAST time they were called to my house, took Mum to hospital, only to have the doctor make them bring her back home again. A waste of their time.

They persuaded her to get in the ambulance and I followed them to the hospital. Fortunately they agreed to keep her overnight and I was able to go home and rest. MRI scans showed up nothing and all she did at the hospital was sleep, something she won't do at home until she's rampaged for several hours and exhausted herself.

On Monday night, the day before she was to go into respite care for 3 weeks, she went on the maddest rampage yet. I managed to get her to shower, gave her 5 mg of Valium (which had no effect whatsoever) and gave her dinner - which she refused to eat. She'd been at Day Care all day, then on the Twilight Bus Tour, arriving home at 5.30 p.m. After all that, I'd have been exhausted - but not her. She was just getting wound up.

She was going on about cats. There's a cat out on the road. Where's my cat? (Which one? There are five??) I want my cat to sleep on my bed. Let me get outside!

By now, all the cats hate her, even the very old one that now has only one eye, that she's had for 15 years. They all run from her. They hide under the beds, they race out through the cat door, they run out into the yard and under the house, anything to get away from her.

She says my daughter and I have made the cats frightened of her. Or she'll say that the cats must be sick, or injured - that's why they're running away. And so she gets herself in an even more paranoid state over it.

On Monday night my daughter went down the back to her flat and I locked myself in my bedroom. I kept reminding myself, just one more day and she'll be in respite. I just have to survive tonight.

Normally I lock the doors so she can't go outside and get hurt in the dark. But this time, I decided to leave them open. After a while it went quiet so I went to investigate out the front. She'd gone down the street in her pyjamas (no shame!) and was putting spoonfuls of chocolate pudding under each telegraph pole. I watched her. It was nearly dark. When she came back, I asked what she was doing. Putting out food for starving stray cats, she said. I told her that chocolate can kill cats and dogs. She didn't seem to care. Probably thought I was lying. She came inside and insisted on leaving the front doors wide open 'so the cats can get in'. I let her go and locked myself back in my room.

After a while it went quiet again. I thought maybe she'd gone to bed. I stayed in my room quite a while, then went out and looked. She was gone.

I went out to the footpath and there she was at the bottom of the street, talking to two Macedonian ladies, whose English wasn't too good. They saw me and brought her up to my front gate. They told me she was lost. Well, this is the first time she has ever 'wandered'. I knew that wandering was one of the major signs of Alzheimers, but she's never done it before. She's gone for walks and come back. I've never had to lock her in. This is a whole new symptom - wandering.

Back inside, she went into a psychotic state, with delusions, hallucinations and paranoia. I locked the back door, but not the front, she was so frantic to keep looking outside for cats.

I went back in my room. She refused to go to bed. I could hear her mumbling about people outside looking in, and how they could murder us all. I could hear her going 'Puss-puss-puss, where are you?' Poor cats!

She broke the back window (second time this week) trying to get outside to imaginary cats. She broke the handle on my bedroom door, trying to get in, presumably to whack me for not co-operating. She went in the spare room and threw things everywhere including the top of the dressing table, the curtains and curtain rod.

Around midnight she finally went to bed and fell asleep.

Someone once told me he was 'terrified' of his mother who lived at home with Alzheimers. I told him to snap out of it and stop being stupid. Now I know it is possible to be terrified of your own mother when she's in a psychotic state.

If I had gone out of my room, she would have attacked me, for sure, and in defending myself, I may have hurt her. This is why I stayed in my room. I considered calling the police, but here in New South Wales, if you call the police to a mentally ill person, there's a good chance they'll shoot them dead.