Strange goings-on at the nursing home 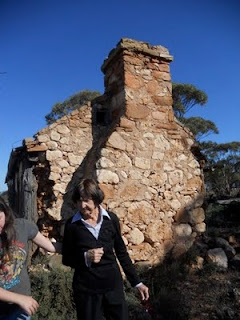 When I got to the nursing home today, Mum had a green grocery bag packed with:

*a picture of her cousin Jack Luke in uniform, 1943
*someone else's crocheted rug
*a pair of pyjamas
*spare undies
*socks
*the nursing home's washer & hand towel
*the key to the china cabinet which I thought I had put out of sight very high up on a cupboard where she couldn't reach it.
Evidently she's stood on something to get the key. That's very dangerous: why didn't someone notice?

The bag was tied in a knot at the handles. She denied having done it. She said men had been in her room and had packed the bag.

Then she said she thought the china cabinet was cracked. It might be, but I can't find the crack. However I did find a trail of blood down the front of the china cabinet
so she's definitely cut herself during the day.

The china cabinet doors were tied up with a hanky. I asked her why and she said "That woman's boyfriend came in here and got into my china cabinet. He wants my things.
You have to take them all to your place." She also demanded I take two large ornaments and some smaller ones from the top of the kitchen cupboards. I refused to take them. I don't have the room. But I'm starting to understand why some residents' rooms are completely bare. It's not that their sons & daughters are too mean to bring things like books, pictures and ornaments - it's that these residents are causing huge problems with these things.

The lady who is Mum's friend does not have a 'boyfriend'. None of the men in the area have dementia and they certainly don't go into Mum's room.

In the bathroom, she'd put a box of photos next to the sink. In the box, on top of the photos, were:

When she wasn't looking I put the bathroom things back in the bathroom cabinet & put the photo box inside the wardrobe.

All her family photos were taken down and piled up on top of the wooden bureau. They were very neatly piled up there. Very strange.

On the window sill were all the towels from the bathroom - four of them. They were tucked in around the glass. I asked why and she said there was a nasty wind coming into the
room from the glass which wasn't properly sealed.

I told her that her window was wide open and closed it, then put away all the towels.

When I got home a nurse rang. He told me Mum wants credit put on her phone. I explained to him that I keep delaying doing that, because $15 goes down the gurgler within 2 days
as she rings me incessantly, waiting for the call to go through to the message bank but never leaving a message. Calls are free but the message bank isn't and this is what drains
the phone credit very fast. I said there is no signal for mobile phones in Port Kembla so it's no use her trying to ring me here. That's why the phone is always turned off when I'm home.
The nurse said he'd explain that to her. I will put the $15 on her phone, but it's such a terrible waste of money. I tried to give him the hint that I don't WANT 50 calls every day. That's one of the main reasons I decided she had to go to Five Islands Court - her persistent calls and demands which were slowly but surely driving me to the brink.

I think she'll have a terrible accident in that room. I've taken away the china cabinet key, but she'll forget and try to climb up on the cupboard again. I think due to her craziness in imagining people after her things and packing bags, she'll do something really stupid like climb up there, fall and break something.

I'm surprised that the only damage she did to herself today was to cut herself given the mischief that she's been up to. Everyone went on a bus trip which she refused to go on, so she was probably left to her own devices with only one nurse on duty. No doubt she planned it that way.

Here she is on a recent visit to her grandchildren in Adelaide, 1400 kms away. On the farm where they live is this gorgeous old house.
Posted by Pye at 11:47 AM