I have noticed a few changes in Mum's condition over the past few weeks. I must re-read some of my previous posts and makes sure I'm not repeating myself, but I'm pretty sure these changes are recent. For around three years she seemed to be fairly stable. Her condition didn't worsen or change, really. But I have noticed these things.

*She has trouble boiling the jug to make a cup of tea. As soon as it starts making its 'ssssshhh'-ing noise, meaning it's on and going, she turns it off, pouring cold water into the mug.

*She's often putting only an inch of water in the mug as well. She was very good at making tea until about a week ago. Tea has been her whole life.

*After I have taken over the tea-making process and sat her down with the mug, she wanders off, not drinking any of it. This is so annoying and it means I have to stay with her while she drinks it, otherwise she's going to get dehydrated.

*She wanders off in the middle of eating, if I don't stay there and keep telling her she's eating dinner and needs to get the next forkful of food. If I put the food in front of her and leave the room, within ten seconds she's somewhere else - outside looking for cats, or in the loungeroom turning on the TV. And I mean 'ten seconds'.

*She's completely lost interest in the TV and cannot follow anything including the news. She started turning the TV on and off, on and off at the power point on the wall, until I had to put sticky tape over the switch to stop her doing it. Now, if she wants the TV on, which is all the time, I have to do it with the remote, and it's a total waste of time because seconds later she's left the room and is telling me to turn off 'that horrible noise'.

*Her hearing seems to have changed. She can't stand any sound at all, not even the door softly closing. If a neighbour is hammering in a nail, she goes berserk over it. "I can't stand that terrible noise!" she shouts, and tries to grab all five cats and drag them inside before the sound 'terrifies' them. They're not concerned by noise at all. A dog barking in the distance, a chair being placed under a table, a door closing, dishes being placed in the drainer, all these are 'terrible noises' and I have to make them stop. This is really odd and I've never heard of anyone with this symptom before, where sounds appear to be amplified.

*She's not completely competent in the toilet any more. I've found poo on the toilet seat quite a bit, toilet paper that should have been flushed away on the seat, on the floor and in the handbasin, poo on the wall where she's got it on her finger and tried to wipe it off and a lump of poo on the bedroom floor which has fallen out after she's left the bathroom. I really can't stand poo and this is disturbing me greatly. Please no more poo!

*She can't get dressed at all. She can't find what to put on and it's not her vision, it's just she has no idea what to put on first. I have to pass her all the items of clothing she needs one by one and tell her which way round to put them. She's also started staying in her pyjamas for hours every morning, something she's never done in her life, maybe because trying to get dressed is becoming too stressful.

*She doesn't go out for walks on her own. She's frightened. She's never been prone to getting lost and has always walked down the street and back, but not any more.

*She hasn't been able to adjust the water in the shower for at least a year and I've been doing it, but she nearly scalded herself the other day when she turned on only the hot tap when I wasn't looking then tried to get under the shower. Just as well I got there in time.

*She no longer knows which cat is hers. Her cat is called Cleo, it's 16 years old and incontinent, so it can't come inside. She has no idea what its name is and I think in a previous post I mentioned she calls every cat 'he' or 'him'. But this is working well because I just pass her any cat and tell her it's her cat and she's happy.

*She can't work out family relationships. I put her on the phone to my daughter and she said she was talking to her 'niece'. She can't name her grandchildren at all. She doesn't know if my brother has any children and when told their names, knows nothing about them, though sometimes when we're shopping, she'll want to buy a babies' book for 'little C.' (he's 17) or a doll for 'little Ca' (14) or a toy for 'A' (now 21 with her own daughter).

All this is extremely frustrating. She can't let me out of her sight. I can't even walk to the letterbox without her getting in a total panic and calling out for me. She'll also wander round the house when she can't see me, saying over and over, "Where is she? Where is she?" Where once she was happy to sit out on the veranda with the cats, now she can't settle there at all. By 4 o'clock in the afternoon I've had enough. I am stressed out of my brain. I can't take any more. I still have to feed and shower her and I'm exhausted. And around this time she starts obsessing about the cats more than ever. She wants them all inside for the night. She gets very angry and nasty. I end up yelling. But I can see the difference with the medication. It's not quite as bad as it was, and through the day I can manage her all right.

I must convince myself not to tell her anything, though. I must never mention it might rain, or the car needs fixing, or I'm going shopping tomorrow, or we need more cat food. If I tell her anything at all, it disturbs her and sends her into a panic. Bad weather specially terrifies her. I keep forgetting, I could kick myself, and I hope I can remember to speak only about the present and the things that are currently surrounding her. "Here's a cat to sit on your knee", "Have a cup of tea" or "Come and sit in the loungeroom" are safe things to say. 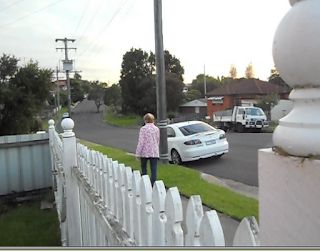 Out the front early in the morning wearing her pyjama top and looking for non-existent cats that have escaped onto the footpath. 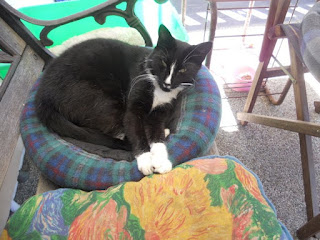 Mr Fuzz...such a cute cat, but fairly feral and does not like her picking him up.
Posted by Pye at 10:17 PM