The last three months since I brought Mum home from the nursing home have been very hard. I didn't realize how bad her psychotic symptoms were, the hallucinations and the obsession with cats. She was keeping me up half the night hammering on the front and back doors, demanding that the cats be let inside (all five of them). Her cat is 16 years old and incontinent so I'm not having it sleeping inside no matter what. I had to deadlock the doors and lock the back window to stop her getting out. It was terrible. 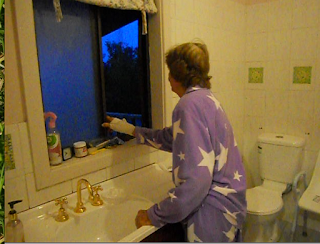 Mum tries to get out the bathroom window to the cats in the middle of the night. Her hand is bandaged to due an attack by one of my feral cats that didn't want to be picked up and carried.

I finally hit on the idea of bringing in one of the cats, called Tapir, to sleep on her bed. She's got so bad she no longer knows which cat is which and calls them all 'my cat' and they are all 'him' or 'he' even if they are female. Tapir is very good - he comes to my room when he needs the toilet and taps on the door so I can let him out. I am not going to do cat litter ever again - it makes me sick. To stop Mum locking him or any cat in her room I had a handyman install a door stopper so it won't close completely. So now I say to her every night, "I am putting your cat on your bed" and she's happy with that. She thinks it is her old cat Cleo. Having one cat on her bed stops her from going after all the other cats every night. Even when it starts pouring with rain, she stays in her bed and doesn't jump up and demand that I go out and 'save' the cats. They don't need saving, they are sleeping on a covered veranda. 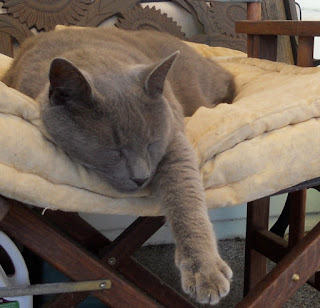