What a big day we've had. I was so frightened I wouldn't survive even the first day.

The day began with Mum banging on my bedroom door somewhere around daybreak to tell me the cats were 'starving' and that I had to get up and feed them NOW.

I was not impressed. The cats are on a strict routine of two meals, the first at 9 a.m. and the second at 5 p.m. This way, they eat everything that's put in front of them, nothing is wasted and they're all sleek, shiny and fit.

Mum suffered from a bad cat obsession when she lived in her own house, up till a year ago. She had dozens of plates of cat food all over the house, fifteen water containers (for one cat!) and she wouldn't let the cat walk anywhere. It had to live on her bed.

If the cat ventured off the bed, she'd grab it and put it back up there. If it wanted the toilet, it would just go on the doona. Its water and food were kept on the bed, which Mum also slept in.

Mum would also hide plates of cat food, including fresh meat and tinned food. She'd hide the food in the cupboards and a few days later you'd find it because you could smell it. She seemed to be hiding the food from imaginary intruders.

The cat obsession was the main reason I thought she'd have to stay in a nursing home and I'd never be able to manage her.

But after nearly a year of not living with the cat or sleeping with it, I thought we had the problem beat. She'd visit me at my house and not do anything silly with the cat. She wouldn't even ask me to feed the cat.

But this morning's shenanigans have me worried the obsession could come back.

I decided to try and deal with tomorrow morning before it arrives. I couldn't get the key out of the back door lock, so I got a handyman over to replace the lock so I can lock the door and take away the key.

I've put newspaper all over the windows where she might look out and see 'starving cats' (since I had to take two of her cats, there are five. Her second cat, she doesn't care much about and never even says hullo to him. The whole obsession is with the older cat).

I have told her a few times - and maybe it sunk in, maybe not - to get herself some breakfast if she gets up early, then turn on her radio and go in the lounge room with it.

I told her it's Sunday and I'm sleeping in.

I don't expect Alzheimers has any respect for Sundays, though.

If her cat was a nice cat, I could handle the situation better. But it's one of the nastiest, most vicious and bad tempered cats I've ever met. It hates all the other cats, hates people and scratches and makes Mum bleed whenever she picks it up.

Here is a nice cat, though. This is Mr Fuzz. He's very photogenic. 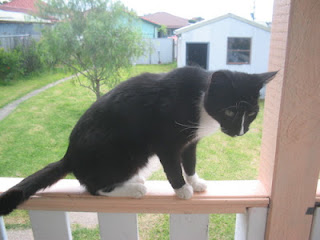