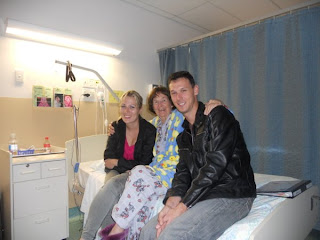 I've been too exhausted to write anything since December. Things certainly got a fair bit worse over the last few months. Finally I asked the GP to refer Mum to a psychiatrist specialising in problems of the elderly. The psychiatrist put her in hospital in February. After observing her for several weeks and listening to what I had to say he said he believed it was too much to expect me to take care of her in her own home. As for possibly taking her to live at my place, he could see that causing huge problems too, due to her night-time obsessive cat-hunting habits. No-one can do without sleep.

He's about the only psychiatrist I have ever liked or trusted. He did not prescribe drugs. I'm pleased about that. He approved Mum's supplements, too, and instructed the nurses to continue giving them to her. Most doctors have no time for vitamins and so on. Mum is trying the new Turmeric capsules. I've read the neurologists in India are very hopeful they can slow the progress of dementia.

So she's been in hospital for a long time. At times she gets very angry and demands that I take her out of there. She was lucky to get a place in a nursing home near me. She'll be in a bedsitter-sized unit which is very nice and help will be on hand when she needs it. They'll make sure she showers (something she rarely wants to do) and changes into clean clothes afterwards. It will be a huge relief but the caregiving won't be coming to an end. I'll need to visit her every day and bring her to my house to visit her cat. I'll also be responsible for taking her to her G.P., dentist, podiatrist and so on.

Here she is in hospital being visited by my daughter and her fiance. They are so kind, but they live 1400 kms away, so I can't expect them to be here all the time.

Packing up her house has been absolute hell: 60 years' worth of accumulated stuff and I have to check every item to see if it's something important or historical that can't be thrown out. As well, she has most of my grandmother's possessions and paperwork so I'm really dealing with nearly 100 years' worth of stuff.

I believe these last few months have taken years off my life. I don't feel well any more like I used to. I get tired and exhausted.

Today I took a china cabinet and a sideboard to her new room and set up all her china nicely. She moves in on Monday.

I hope she doesn't get angry and hate it there.
Posted by Pye at 3:18 AM