Alzheimers: sorting out the TV Remote and other mysterious electronic devices

I couldn't resist this. It's funny and it's not funny, because when Mum was living at her own house and at my house I used to do things like this! I also tried:

*Putting cellotape over switches I didn't want turned on or off. This worked - the transparent tape was too hard to find to rip off.
*Chaining the cat food bowl to anything nearby so she couldn't keep moving it and putting it somewhere weird, like the cupboard or the fridge. But she was smart enough to go and get another dish and tip the cat food into it.
*Putting chains around gates
*Chaining gates open that I didn't want shut
*Locking kitchen cupboard doors with chains, but she just ripped the doors right off their hinges in her desperation to get in there - who knows why.
*Having a doorstopper screwed into the floor near the bedroom door so she couldn't keep locking cats in there.
*Having the back windows screwed shut so she couldn't open them in the middle of the night and go "Puss puss puss!" while trying to let cats in via the windows.
*Turning off the water so she couldn't flood the place while I was gone, and only leaving enough water in the jug for her to drink.
*Pulling out the fuse that worked the kitchen stove
*Taping the mobile phone together to discourage her from pulling it apart and removing the battery. But she can remove tape.

But really, nothing will prevent their extreme agitation and determination to do weird stuff. 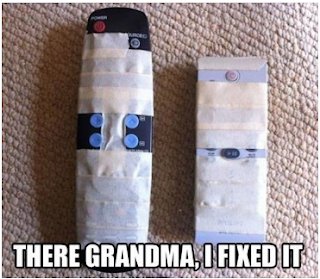