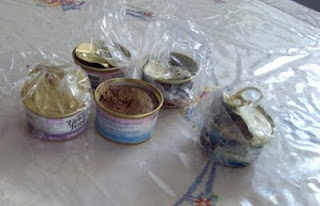 What a horrible day. I left Mum at the doctor's at 8.00 so I could go to work and she could get the bandage on her leg changed. The doctor is situated in the Westfield Shopping Mall.

I knew she would probably buy unnecessary cat food while she was at the shops. I wasn't worried as I just hide it once I get to her house and put out only the cat food for that day to save wastage and attacks of paranoia resulting in six full bowls of cat food appearing in various parts of the house. Then she chocks open all the doors with chairs in case an earthquake happens and the cat is trapped somewhere that it can't get to its food.

When I got back from work sure enough, she had bought more dry food. We have the Science Diet from the vet and the vet has told her twice not to feed any other types of food with it to ensure a balanced diet. So I've been putting the Science Diet into plastic containers labelled with the day of the week. That has been going all right for a few days.

So I got rid of all the excess bowls of dry food (about five bowls full to the brim) and then had a look in the fridge. In the fridge there were SIX CANS OF EXCLUSIVE-BRAND TINY TINS OF GOURMET CAT FOOD WHICH ARE $1.90 EACH and each can had had one teaspoon of cat food removed from it, then wrapped in a sandwich bag and placed in the fridge. SIX CANS IN ONE DAY. Thats $11 or more depending on where she bought the gourmet cans. When the cat wouldn't eat a teaspoon of the food, she's opened another can, then another, then another because she gets this idea into her head that THE POOR CAT IS STARVING and she HAS TO FIND A WAY TO ENCOURAGE IT TO EAT, so if it doesn't eat the first flavour, she opens another one. It's just another type of paranoia.

So I got all the cans out of the fridge and asked Mum to sit down at the table and we would talk about cat food. I put all the cans in front of her and I said, "You have opened six cans of cat food today which you bought down at the shops this morning. This is wasteful because in a couple of days they would have to be thrown out. This is why you have to let me look after the cat food and organize the feeding of the cats." (it was CAT, but she has stolen a neighbour's cat by enticing him with gourmet cat food. The cat's owner was very angry at first but she's just given up the fight to keep her cat and no longer worries about it).

I reminded her that the vet said not to give the cats any other type of food apart from Science Diet. I reminded her that we don't need tins of cat food any more because we have SCIENCE DIET FROM THE VET and we are following the VET'S INSTRUCTIONS.

I said all this very calmly and SLOWLY as people with dementia don't like others saying or doing anything quickly. Then I said, "I will take these wasted cans of cat food home to my cats to get rid of them."

At that point, she jumped up, an evil, angry look on her face and grabbed at my face and at the bag I was holding with her fingernails. She screamed "You are not taking my cat food off me! Get out of here! I hate you!"

Well, I have had ENOUGH of her today, ABSOLUTELY ENOUGH.

I do NOT want her living on my premises even if in a granny flat. I could not put up with this kind of thing. It is as bad as living with some poor person who has schizophrenia. In fact, the similarities between the two diseases are so obvious I'm surprised no-one has remarked about it in the past and no research is being done into whether the two conditions are linked.

I grabbed the cat food anyway and made for the door. As I was leaving, she got all maudlin. She said, "Give me a hug." I stepped aside and avoided it.

No, I am not hugging you. I don't know who you are. You are not my mother. You are a horrible, nasty, violent, insane person who has taken over my mother's soul.
Posted by Pye at 6:16 PM