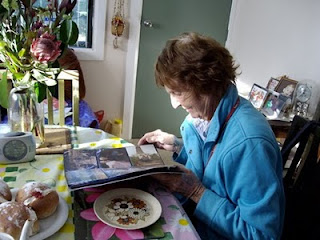 Things have continued much as before, or maybe a little worse. Every week it seems some new thing gains prominence: this week it was lids off containers. There are no lids on the coffee, Milo, milk cartons and many other things. They can't be found either: they've disappeared, so I assume they've ended up in the bin. Such a waste of food; the stress of everything gets me down.

Mum had a second colonoscopy and apparently the news isn't good. We see the surgeon later today. It seems major surgery is imminent and the surgeon has already said that elderly people often don't survive it.

I've tried hard to make her life happy lately. On Mothers Day we went for a long drive down the coast and had lunch at a pub. We're planning a trip to Cairns; I'll try and delay the surgery until we do that.

In the picture Mum is looking at photos at her sister-in-law's house.
Posted by Pye at 6:16 AM